The raptor, found earlier in the day, had been placed on a park bench and could be seen with puncture wounds on its body. However, as Urban Bird Foundation did not recover the carcass and has not received a detailed report of the incident from witnesses, the organization could not definitively determine if the puncture wounds were the cause of death or if they occurred afterwards.

Sharon Negri, Director of WildFutures, reported the incident to Urban Bird Foundation. Negri said, “With so few sightings of these birds the last few years in the Marina, I was sad to see this one lost its life there.” 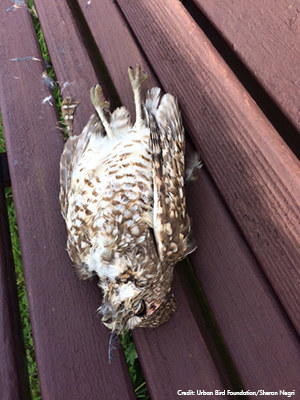 Berkeley Marina, Cesar Chavez Park, and Eastshore State Park provide wintering habitat for a few owls each year with individuals typically arriving in October and leaving in March. “This community accessible, mixed-use urban open space not only provides habitat for burrowing owls but affords an opportunity for the public to see and learn about the raptor. Urban Bird Foundation hosts burrowing owl field experiences at the park and Golden Gate Audubon runs a robust docent program aimed at educating the public about the species,” said Scott Artis, Executive Director of Urban Bird Foundation and Burrowing Owl Conservation Network. “Receiving reports of dead burrowing owls are always disheartening as we work each day to protect this incredibly unique species, but this news is especially sad considering only 2 to 3 owls return to Berkeley’s Cesar Chavez Park each year.”

Burrowing owls have been declining in parts of its range for decades, due primarily to conversion of its grassland habitat. The owl has been virtually extirpated in some areas, and has even been the subject of a California Endangered Species Act listing proposal. California is considered one of the most important wintering grounds for migrant burrowing owls.

The Western burrowing owl (Athene cunicularia hypugaea) is a California Species of Special Concern and is listed as Endangered in Canada and Threatened in Mexico. They are considered by the U.S. Fish and Wildlife Service (USFWS) to be a Bird of Conservation Concern at the national level, in three USFWS regions, and in nine Bird Conservation Regions. At the state level, Western burrowing owls are listed as Endangered in Minnesota, Threatened in Colorado and Florida, and as a Species of Concern in Arizona, California, Montana, Oklahoma, Oregon, Utah, Washington, and Wyoming. The owl is found in open areas with low vegetation where fossorial mammals (e.g. ground squirrels) congregate such as grasslands, deserts, farmlands, rangelands, golf courses, and vacant lots in urban areas. It was once distributed broadly throughout western North America, but has found itself declining in numbers throughout all historic ranges in the last 40 years.